Clastic Sedimentary and Its Environments

Clastic sediment rocks are rocks which are formed from broken pieces of other pre-existing rocks by physical weathering. Then, rock particles are transported to lower lying areas. Mechanically eroded small pieces of rocks are usually formed in an angular shape because of a natural fracture point when erosion takes place initially.

Alluvial environment includes meander belts on flood plains, river channels (fluvial), alluvial fans and alluvial plains. When water flows, it erodes substances from fast flowing regions and deposits the material in slow moving areas. So, channels will move over time due to this action. When channels move, a distinctive sedimentary sequence is built. Coarse sands / gravels are on the floor of a channel and fine particles, such as silts and clays are on top of the flood plan. This case is known as a fining upward alluvial cycle.

This environment is dry, so sand in a desert will be blown by the wind. This will result in sand dune formations (Figure 3) which are characterized, as well sorted sand, with cross bedding features. 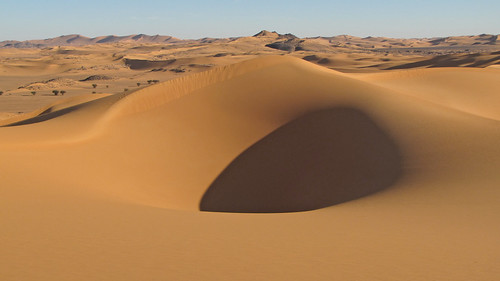 Beach and bar sands occur from wave motion and particles in this environment are typically well rounded and sorted. Bedding inclines toward the sea and oscillation ripples in a surf zone.

Shallow marine environment is sedimentation on continental shelves, which is determined by tidal currents and wave bottoms.

Turbidite is formed by submarine slumps when sediment at the top slope is dislodged and moves as a turbid flow down the slope.