As the name suggests, the concrete gravity structure is reliant on its own weight, and the capability of the seabed to maintain that weight, in order to remain stable. They are designed particularly with storm conditions in mind. Like other types of structure, they come in multiple design variations, and may be made out of concrete, steel, or a combination of the two. Concrete gravity structures were first used in the Ekofisk Field off Norway, although the design principle had previously been used in lighthouse construction. The Ekofisk structure, which had originally only been intended for oil storage but was then modified for use as a large gas handling and compression plant, was soon followed up with the construction of multiple additional drilling and production concrete gravity structures made from reinforced concrete. Given the huge demand placed on onshore prefabrication sites, and the significance of the water depths available to constructors for fabricating and towing these structures near to the shore, there has been a wide variety of different gravity designs, despite being constrained by the conditions of the construction site. It has been impossible to create an optimized design which is suitable to be built at all available sites.

The concrete gravity structure is built in a tapered shape, with as much of the mass and bulk concentrated as close as possible to the seabed. Ideally, the platform is constructed close to the shore, and the topside facilities are placed in a sheltered site before the offshore tow begins. Then, the whole thing is moved to its final location through the use of ocean-going tugs. This is done as much as possible using a multi-celled caisson raft, which can measure up to 100 meters high and 60 meters wide. From this raft base, a number of columns will be carried up to the full height of the structure. When the raft reaches the offshore location, the caisson is water ballasted and landed on the sea bed, Offshore installation can therefore take as little as a few days, which is certainly an advantage in harsh areas which have short fair weather periods. Concrete gravity structures can be used in water depths up to 160 meters and with weights of over 300,000 tonnes.

Figure 1 demonstrates Ninian Central platform, a large concrete tower with a series of tanks around the base. These concrete fixed platforms are able to store fluids, and can also be attached to export lines, which gives them a significant advantage over steel jacket platforms. Jacket platforms generally lack tanks, although they can be built on deck, which means that their export can be entirely lost if a tanker does not stick to its strict schedule. Concrete platforms also do not need to be secured to the seabed. Thanks to skirts around the concrete, erosion is prevented. Concrete platforms perform exactly the same function as steel jacket platforms, with only the support structure being different.

Figure 2 shows the Ninian Central platform in bad weather, with only the top being visible. The accommodation block and satellite dishes can be seen on the left of the structure, as can several lifeboats. Since the Piper Alpha disaster, lifeboat stations are almost always located near the accommodation block. Ninian Central is a concrete monotower, weighing between 500 and 750 tonnes.

Figure 3 demonstrates a large concrete fixed platform being built in a Norwegian fjord. This type of structure is known as a condeep. Tanks are built around the base of a concrete structure, which are used for sinking the platform when it is in its final position, and can then be used as storage tanks for produced reservoir fluids.

Figure 4 shows another significant advantage of concrete fixed platforms over steel jacket platforms. The main concrete structure can be built in the fjord, and then ballasted down to allow the mating of the main deck. This deck can then be built entirely onshore, before being sailed out to the concrete structure and attached. This is simply not possible with a steel structure. This picture shows a fairly typical modern platform. The accommodation block is the white structure on the far left, while the processing equipment is located on the opposite side for safety reasons. 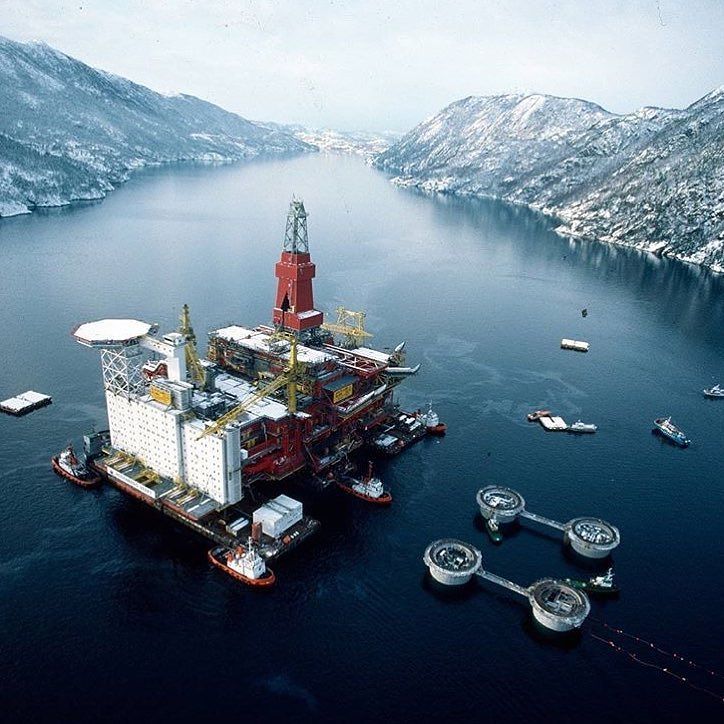 Horsepower Requirement to Move a Platform

Figure 5 shows the vast amount of horsepower needed to move Troll A concrete platform with surface structure attached to its field location. The superstructure weighs around 25,000-30,000 tonnes, along with a jacket weight of 400,000 tonnes. Approximately 300,000 horsepower is therefore required to adequately tow and steer the structure.

Figure 6 shows the Brent field in the Central North Sea, one of the original Shell fields.  For the Brent field, one piled structure and three concrete gravity platforms were utilized for the field development. The platforms in this field are all close together, because technology limitations at the time meant each reservoir needed its own platform. Were Shell to build this field now, there would be no need for the four platforms. Thanks to modern subsea technology and extended reach drilling, the reservoir fluids could all be brought back to a single location for processing. 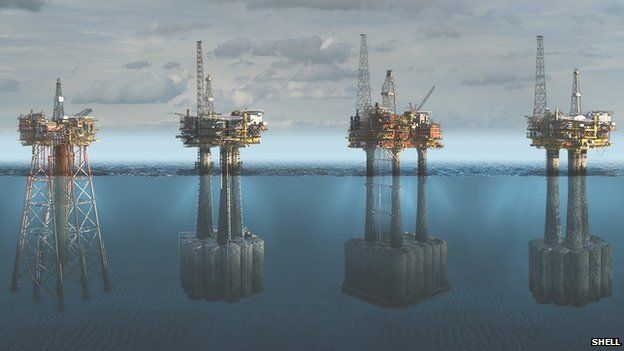