One of the most important concepts of mapping is latitude and longitude.

Latitude is a coordinate used to specify the north-south position of a location on the surface of the Earth. Latitude is an angle which starts from 0° at the equator to 90° at the Earth North-South poles. It is simply defined like this;

To define latitude, it is described in degrees, minutes and seconds. Parallel line of latitude is a small circle at particular latitude which is parallel with the Equator. 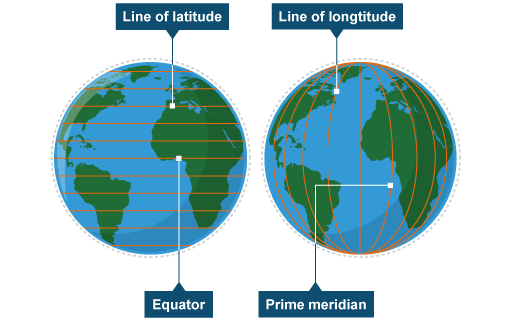 Latitude and longitude are used together in order to identify the location on the Earth. For example, the longitude and latitude of London written in degrees, minutes and seconds is 51°30′ 26″ N 0° 7′ 39″ W.

Figure 2 – Latitude and Longitude of London

The actual Earth’s shape is an oblate spheroid because the Earth’s equatorial diameter is slightly bigger than the Earth’s polar diameter. Even though the flatting of the Earth is one in three hundred, it makes a big difference in scale calculation in maps used in the directional drilling field. For map projections, different regions/countries use different reference ellipsoids and nowadays there are more than 50 ellipsoid models. Approximately, 15 ellipsoids can cover 98% of oil countries in the World. In order to accurately identify locations of the Earth, it is required to identify a Geodetic Datum which consists of ellipsoid, orientation of ellipsoid, unit of length, region of the Earth and office name.

Map projection is a method used to convert the position (latitude-longitude) on the surface of a sphere into another method of positioning that can be drawn on a flat map with known accuracy and a controlled degree of error. X-Y Cartesian coordinate is the most common map positioning method. Two commonly used methods for map projection are Lambert Conformal Conic Projection and Transverse Mercator (TM).

Lambert conformal conic projection (Figure 3), which was introduced by Johann Heinrich Lambert in 1772, is a projection method of the Earth onto a cone. The cone axis coincides with the geographic pole axis of the Earth. 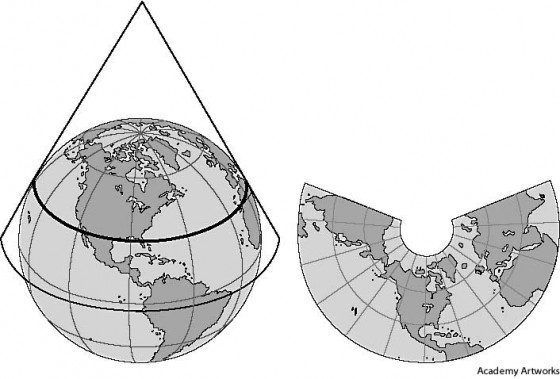 Transverse Mercator is most widely used for map projection and this is the basic principle of the Universal Transverse Mercator system. This method overcomes the scale error at high latitudes which will happen with the Mercator projection. The details in the map are projected into an imaginary cylinder for all latitudes with a narrow area of longitude.