Much offshore gas and oil exploration takes place many miles beneath the ocean. As well as involving some seriously complex equipment, oil platforms can also be dangerous places, with numerous environmental hazards to deal with. Well drilling has taken place for thousands of years, with the earliest known instance being in China in 347 AD, and since then there have been numerous accidents which have had a serious impact both on human life and the environment. There is a positive side to this, though- virtually every accident has led to safety reviews, and helped to improve safety protocols and equipment.

Below, we’ve put together a list of the ten catastrophic oil rig accidents, to demonstrate just how dangerous this industry can be.

The Piper Alpha disaster is by far the deadliest offshore oil rig accident in history, with 167 of the 226 people onboard at the time losing their lives. Before the incident, the platform off the coast of the UK in the North Sea was producing around 300,000 barrels of crude oil each day- around 10% of the UK’s total oil output. However, in 1988, a communication error led to a deadly mistake. On the morning of July the 6th, an essential safety valve had been removed from a gas pump, and the pump was placed strictly off limits. However, that information was not properly passed on to the shift managers later in the day, who proceeded to start the pump. This caused a continuous gas leak and a massive fire, which completely destroyed the whole platform. Even worse, the crew had not been properly trained in how to deal with such an incident, and their panic was what led to many of them losing their lives. In the end, it took three weeks to get the fire under control, and just 61 of the crew members made it out alive.

The Alexander L. Kielland was a semi-submersible platform in Scotland, which at the time served as accommodation for the workers on the Edda oil rig. The rig itself was owned by Stavanger Drilling, a Norwegian-based company, and operated by Phillips Petroleum. However, on that fateful day, one of the bracings attached to the five-legged platform structure failed after being battered by huge waves and high winds. The whole structure tilted some 30 degrees, before being stabilized by a single remaining cable. Eventually, though, the tension became too great, and that cable snapped. This caused the entire platform to turn upside down, trapping many of the workers onboard inside as the platform sank into the deep waters. Of the 212 workers, 123 lost their lives. The subsequent investigation revealed that the weld of an instrumental connection on the bracing had a fatigue crack which had not been noticed- a relatively small problem that ultimately led to deadly consequences.

The Seacrest was also known as the Scan Queen, and was owned by the Unocal Corporation. Whilst operating 430km south of Bangkok in the South China Sea, the ship was anchored for drilling at the Platong oil field, when it was hit by 40ft high winds and winds of over 100 knots, caused by Typhoon Gay. The drillship was reported missing the next day, and on the 5th of November was found capsized by a search helicopter. Investigators concluded that the rig had capsized so quickly that there was no time for the crew members to issue a distress signal, let alone act- all 91 crew members lost their lives.

The Ocean Ranger was a semi-submersible offshore drilling rig. While it was owned by the by Ocean Drilling and Exploration Company (ODECO), it had been hired by Mobil Oil of Canada, in order to conduct explorations in the Hibernia Field. At the time, it was one of the largest rigs in the world, able to operate up to 1,500 feet underwater and drill 25,000 beneath the seabed. During a storm, though, the chain locker and upper deck flooded, leading to a loss of buoyancy that caused the rig to capsize. All 84 workers aboard died in the freezing seas.

The Glomar Java Sea was an American drillship, owned by Global Marine Inc., which went missing in the South China Sea during a tropical storm. The rescue effort lasted a week, before search vessels discovered the wreckage some 300 feet underwater. On board had been 42 Americans, 34 Chinese, 4 Britons, and a single Australian. The drillship had halted operations when Storm Lex approached it from the east, and they had reported to Global Marine’s office in Texas that they were experiencing 75 knot winds over the bow. Suddenly, the main office lost contact with the ship, and only 36 bodies were ever recovered- the other 45 crew members remain missing, presumed dead.

The Bohai 2 oil rig was operating in the Gulf of Bohai, between China and Korea, and was at the time the oldest Chinese-owned oil rig in operation. On November 25th, 1979, the rig was being towed when it was hit by a fierce storm. The high winds broke the ventilator pump, creating a large hole in the deck which quickly became filled with water. This flooding, along with the existing adverse weather conditions, eventually caused the rig to capsize. To make matters worse, the crew members had not received proper training on emergency evacuation procedures or the use of lifesaving equipment, and the accompanying tow boat could only rescue four of the 76 workers on board. Later investigations showed that the deck equipment had not been properly stowed before towing- if it had, then it’s likely more would have survived. The Yuntai Salvage Company eventually used explosives to salvage the sunken rig in 1981.

On 16th August 1984, the Enchova Central Platform was operating in the Campos Basin near Rio de Janeiro, Brazil, when a blowout caused an explosion and subsequent fire on the platform. The majority of the workers aboard were evacuated via helicopter or lifeboats, and survived the accident. 42 other workers weren’t so lucky, though, and didn’t make it out alive. 36 of these deaths were due to the malfunctioning of the lowering mechanism of a lifeboat. The bow hook failed, and the boat was left dangling vertically before plummeting 20 meters into the sea when the supporting cables snapped. The other six deaths were due to workers jumping from the platform into the sea when they were left with no other way out. Incredibly, it wasn’t until another similar accident took place 18 months later that the platform was replaced.

The Bombay High North platform operated by India’s state-owned Oil and Natural Gas Corporation (ONGC), and was situated in the Mumbai High oil field. On the day of the accident, though it was struck by the support vessel Samudra Suraksha, which had been pushed towards the platform by strong swells. The support vessel hit the platform’s gas export risers and caused at least one of them to leak and, eventually, explode. The resulting fire killed 22 people, and caused significant damage to both the Samudra Suraksha and the Noble Charlie Yester, a jack-up rig operating near the BHN platform. It also caused a huge oil spill, and 120,000 barrels of oil and 4.4 million cubic meters of gas were lost per day. ONGC opened a replacement platform in October 2012. 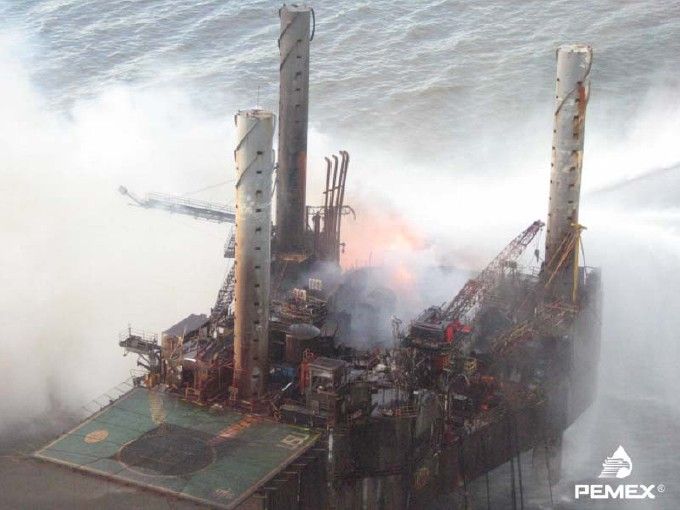 This accident took place in the Gulf of Mexico, when the Usumacinta jack-up platform collided with the PEMEX-operated Kab-101 platform. The cantilever deck of the latter hit the production tree of the Usumacinta, due to storm conditions leading to high winds of around 130 km an hour and waves of 8 meters high. The collision caused oil and gas leakage, and the crew members of the Usumacinta tried to close the safety valves of two production wells on the platform. However, they were unable to completely close them off, and the resulting leakage eventually caused a fire on the platform. 21 people were confirmed dead in the evacuation, and another worker who went missing during the rescue operations was also presumed dead.

The C.P. Baker Drilling Barge disaster also took place in the Gulf of Mexico. The barge was deployed for drilling operations when the hull suffered a blowout. Water began to pour in, and spread throughout the vessel due to the doors on the main deck being left open. It wasn’t long before the whole barge lost power, and within a few minutes of the blowout, an explosion caused the vessel to be engulfed in flames. The crew were forced to abandon ship, but just 22 of the 43 workers aboard survived by jumping into the sea. Eight others were confirmed dead, and a further 13 were missing, presumed dead.