After learning about the Earth’s structure and Plate Tectonics, it is known that the Earth’s plates move relative to nearby plates; therefore this will result in high geological activities such as volcanic eruptions and earthquakes at the plate margins. It is also possible to have geological activities in the middle of plates, but it is quite uncommon. There are three type of plate margins; convergent, divergent and transform.

This happens when the Earth’s plates are moving apart and a new lithosphere is created (Figure 1).  In the oceans, the divergent process has produced the mid-ocean ridge system, which can also be described as a global range of underwater mountains. There are several ocean ridges such as the Juan de Fuca Ridge, the Mid-Atlantic Ridge, the Galapagos Rise and the East Pacific Rise. On land, the divergent margins create rift valleys such as the Red Sea and East African Rifts (Figure 2). 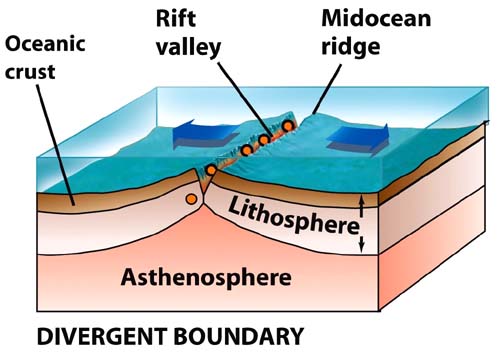