What are Drilling Jars? 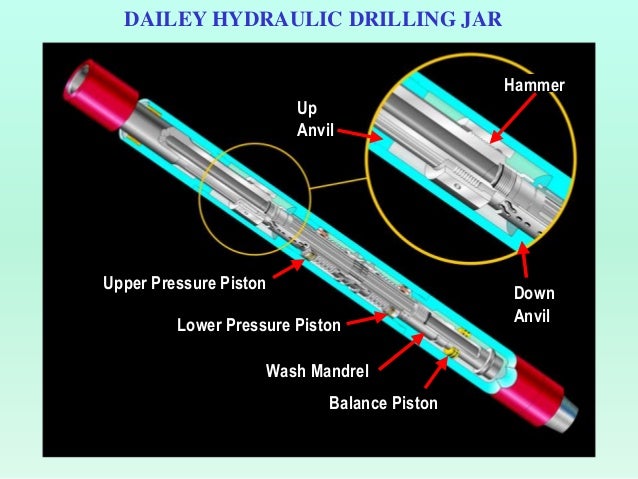 When normal drilling procedures are followed, the jarring mechanism will be automatically disengaged, and drilling string torque will be transmitted to the lower assembly using a separate compensated drive system. Sufficient drive lubrication is usually provided by high-temperature lubricants in most downhole conditions. Within the jar’s hydraulics are powerful seals that can withstand up to 20,000 psi up to 500°F. There are numerous back-up seals used to guard against premature failure of these drive lubrication seals and rig pump hydraulic seals.

If the amount of surface push or pull is adjusted, then there is no need of any torque or external adjustments. This allows the operator to deliver a capacity blow anywhere from very small to maximum capacity in either direction, and also to control the number of blows struck in a certain time period. The string doesn’t need to be manipulated in any other way to operate the jar, and it will be automatically reset for following blows in either direction.

Modern jars may be run in tension or compression, but it is important to note that they can’t be run at or within 15% of the natural weight. Jars also shouldn’t be run as crossovers between collars and heavy weight drill pipe, nor between drill collars of differing ODs. This is because these transition points are the places where the most extreme stress will occur, and this can increase the chances of mechanical failure. One should therefore run the same size of collar or heavy weight drill pip directly above and below the jar. Jars should not be run below key seat wipers, reamers, or other tools with a larger OD than the jar; this will have a negative effect on the jarring function.

Jars are usually in tension when the bit hits the bottom. They need to be triggered down with a light load, to minimize the risk of damage to the bit. It is recommended that one starts by rotating and slacking off weight so that the jar is only slightly in compression. When the jar has fallen through, one may then slack off to the final drilling weight. The jar will cock each time the string is lifted off the bottom, meaning this process needs to be repeated for each connection.

It is necessary to keep jars in tension when running, to prevent them from being accidentally triggered:

Should the jar cock accidentally, the drill pipe must be suspended in the elevator to allow the jar to trip open from the weight of the collars suspended below it, before it can be run into the hole.

There is no need to pre-set or adjust the jar before running prior to jarring. This is because jars are controlled using axial motion from the surface. To do this, from the neutral position, pull up to the desired load. After a few seconds, the jar will jar up. To jar down, do the same, but slack off to the required load. After impact, the jar should be returned to neutral. It is then immediately ready to jar again in either direction. The strength of impact will depend on how hard you pull. The jar bay be hit in any required sequence. Waiting time between setting the brake and the jarring action can range from ten to sixty seconds, and is independent of changes in downhole temperature, hydrostatic pressure, or how many times the jar is actuated. There is no need to warm up a jar, and no cooling off period. Jars are not affected by drilling torque, and the magnitude and time delay of the jarring action is similarly unaffected by how much torque is applied.

There is no need to slack off (or, if jarring down, pull) a precise amount of weight, or to control the travel of the jar, in order to re-cock it. The right travel will happen automatically so long as sufficient weight is slacked off or pulled up to allow the necessary travel at the tool.

Should the drill string get stuck on the bottom while drilling, or if twist offs happen, then a jar may deliver its releasing effort in an upwards motion. If the pipe becomes stuck off-bottom in key seats, or if it is stuck because of other reasons, it can be released by jarring downwards. The upward reaming methods can then be used in order to recover the whole drill string.

Should differential sticking be encountered, it may be necessary to move the stuck pipe to regain rotation and circulation, so that, for instance, jars can move up and down as normal. A jar actuation won’t disturb the directional orientation of the drillstring, so they are useful neutral tools for downhole motor directional drilling and directional jetting.

Jars are also of use in fishing and cutting jobs, as well as for drilling and production tools, cementing, coring operations, and multiple downhole operations.

Example of drilling jars in the market