It’s used for mechanically lifting the liquid out of a well if there isn’t enough bottom hole pressure for liquid to flow to the surface. Commonly this arrangement is used for the onshore wells that don’t produce much oil. The pumpjacks are quite common in the oil rich areas.

Generally a pumpjack produces 5 – 40 liters of liquid with each stroke. It is often an emulsion of water and crude oil. Couple of factors on which the size of the pump is determined are the weight and the depth of oil that is to be removed. More power is required to move increased weight of discharge head (discharge column), in deeper extractions.

The rotary mechanism of motor is converted to vertical reciprocating motion by a pumpjack in order to drive pump shaft and it is exhibited in characteristic nodding motion. ‘Walking beam’ is the engineering term used for such a mechanism. This mechanism was often employed in the marine and stationary designs of steam engines in 18th and 19th century. 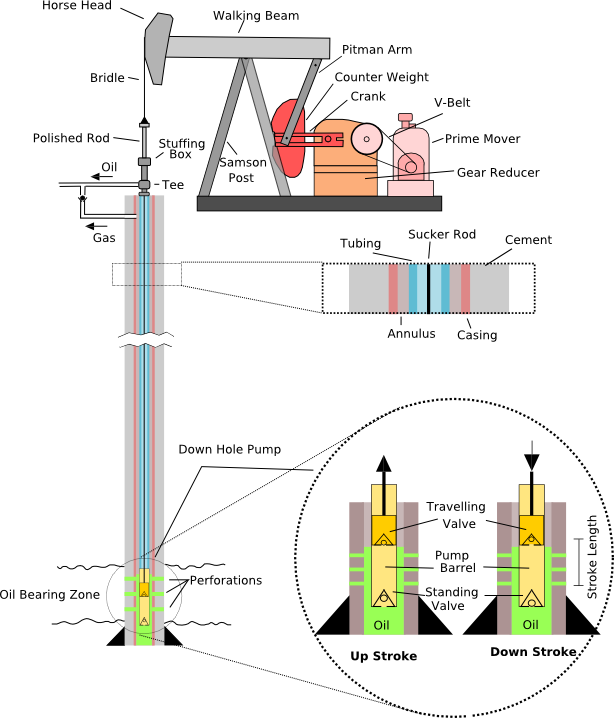 In earlier days, the pumpjacks were actuated by the rod lines that used to run horizontally above ground to an eccentric wheel in a mechanism called central power. Central power could operate dozen or even more pumpjacks and it was powered by internal combustion or steam engine or by electric motor. One of the difficulties in this scheme was to maintain the system balance as the individual well loads changed.

A prime mover is used to power the modern day pumpjacks. It is usually an electric motor, but in some isolated locations that don’t have electricity access, the internal combustion engines are used. The common pumpjack engines are run on the casing gas that is produced from wells, but the pumpjacks have been run on different types of fuels like diesel and propane fuel. In the harsh climates, such engines and motors might be housed in a shack for the protection from elements.

A set of pulleys is run to transmission by the prime mover of pump jack. This drives pair of cranks, usually with the counterweights on them in order to provide assistance to the motor in lifting heavy strings of rods. One end of the I-beam is raised and lowered by the cranks. The I-beam can move freely on A-frame. There is a curved metal box on the other end of beam. This metal box is known as donkey head or horse head because of its appearance. The horse head is connected to a polished rod, piston which passes through stuffing box. This connection is via steel cable or sometimes fiberglass.

The polished rod has close fit to stuffing box which lets it move in and out of tubing without the fluid escaping. (A pipe which runs to bottom of the well and through which liquid gets produced is the tubing). The bridle follows curve of horse head as it raises and lowers to create an almost vertical stroke. A long string of rods known as sucker rods connects the polished road. This long string runs through tubing to down-hole pump and is normally positioned near bottom of the well.

There is a down-hole pump located at bottom of tubing. There are 2 ball check valves in this pump. There is a stationary valve located at bottom known as standing valve and there is another valve on piston connected to bottom of sucker rods known as traveling valve. The traveling valve travels up & down as rods reciprocate. The fluid in reservoir enters from formation in to bottom of borehole via perforations which are made through cement and casing. (Casing is the larger pipe of metal which runs through the length of well. Cement is placed between casing and earth; pump, tubing and the sucker are all inside casing).

Often, gas gets produced via same perforations as oil. It can be problematic in case the gas enters pump because it may lead to gas locking. In gas locking an insufficient pressure gets built up in pump barrel to open valves (because of compression of gas) and very little or absolutely nothing gets pumped. In order to preclude this, inlet for pump can be placed below perforations. As fluid laden with gas enters well bore via perforations, gas bubbles up annulus (space between casing and tubing) while liquid moves down to standing valve inlet. Once at surface, gas is collected via piping connected to annulus.

The influence of the pumpjack:

The pumpjacks have had a positive effect on petroleum industry. The efficiency of the extraction process has improved. In many cases, the wells life is extended by many years by a pumpjack. This allows the operators to reach the oil which would remain untapped otherwise. The traditional oil extraction methods have been primary & secondary methods, which according to studies by US Department of Energy, exhaust only a quarter and half of the oil reserves of a well. Such profligacy was addressed by development of tertiary technique which is more commonly known as the enhanced oil recovery (EOR).

The pumpjacks also facilitates the low operational costs. The performance of a pumpjack can be remotely monitored by using smart technology. This means that there is no need to heavily man it. For the oil wells having low production, it is a huge benefit ensuring that the running costs don’t outstrip the oil supply levels.

Output of a pumpjack is different for each case. According to estimates the output can be anywhere between 5 to 40 liters of liquid per stroke. However, in reality, output depends on a number of different factors. How much fluid is there in pump bore? What is oil’s percentage in extracted liquid? How big is pumpjack and how many strokes it can reach per minute?

The pumpjacks aren’t exclusive to petroleum industry. They are also used on smaller scale for replacing the traditional techniques of hand pumping at the water wells.