What is the longest, deepest and largest hole ever drilled on earth?

This is very interesting information about the longest, deepest and largest hole ever drilled on earth. You will be amazed how people can overcome the limit of nature.

Then on 28 January 2011, Exxon Neftegas Ltd., operator of the Sakhalin-1 project, drilled the then world’s longest extended-reach well. It has surpassed both the Al Shaheen well and the previous decades-long leader Kola Superdeep Borehole as the world’s longest borehole. The Odoptu OP-11 Well reached a measured total depth of 40,502 ft (12,345 m) and a horizontal displacement of 37,648 ft (11,475 m). Exxon Neftegas completed the well in 60 days.

Today, the deepest hole ever created by mankind lies beneath the tower on Russia’s Kola Peninsula, near the Norwegian border at about the same latitude as Prudhoe Bay, Alaska. And It is not oil or gas that is being sought with the Kola well, but an understanding of the nature of the earth’s crust.

In 1962, a drilling effort was led by the USSR’s Interdepartmental Scientific Council for the Study of the Earth’s Interior and Superdeep Drilling, which spent years preparing for the historic project. It was started in parallel to the Space Race, a period of intense competition between the U.S. and U.S.S.R. The survey to find a suitable drill site was completed in 1965 when project leaders decided to drill on the Kola Peninsula in the north-west portion of the Soviet Union. After five more years of construction and preparations, the drill began on 24 May 1970 using the Uralmash-4E, and later the Uralmash-15000 series drilling rig.

A number of boreholes were drilled by kicking off the central hole. The deepest, SG-3, reached 40,230 ft (12,262 m) in 1989, and is the deepest hole ever drilled, and the deepest artificial point on Earth (the previous record holder was the Bertha Rogers well in Oklahoma—a gas well stopped at 32,000 feet when it struck molten sulfur) .In terms of true depth, it is the deepest borehole in the world. For two decades it was also the world’s longest borehole, in terms of measured depth along the well bore, until surpassed in 2008 by the 12,289-metre-long (40,318 ft) Al Shaheen oil well in Qatar, and in 2011 by 12,345-metre-long (40,502 ft) Sakhalin-I Odoptu OP-11 Well (offshore the Russian island Sakhalin). 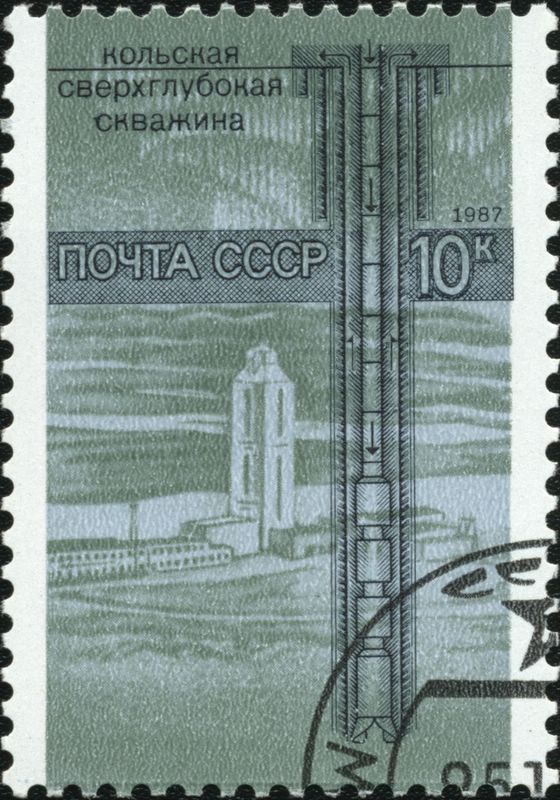 It’s possible to draw a reasonable cross section of the earth based purely on remote geophysical (largely seismic) methods, but unless on-the-spot checks can be made, there will always be a certain amount of guesswork involved. Digging down to take a look compares with studies made from the surface in the way that exploratory surgery compares with taking an X-ray.

An unexpected find was a menagerie of microscopic fossils as deep as 6.7 kilometers below the surface. Twenty-four distinct species of plankton microfossils were found, and they were discovered to have carbon and nitrogen coverings rather than the typical limestone or silica. Despite the harsh environment of heat and pressure, the microscopic remains were remarkably intact.

The Russian researchers were also surprised at how quickly the temperatures rose as the borehole deepened, which is the factor that ultimately halted the project’s progress. Despite the scientists’ efforts to combat the heat by refrigerating the drilling mud before pumping it down, at twelve kilometers the drill began to approach its maximum heat tolerance. At that depth researchers had estimated that they would encounter rocks at 212°F (100°C ), but the actual temperature was about 356°F (180°C)– much higher than anticipated. At that level of heat and pressure, the rocks began to act more like a plastic than a solid, and the hole had a tendency to flow closed whenever the drill bit was pulled out for replacement. Forward progress became impossible without some technological breakthroughs and major renovations of the equipment on hand, so drilling stopped on the SG-3 branch. If the hole had reached the initial goal of 15,000 meters, temperatures would have reached a projected 572°F (300°C).

When drilling stopped in 1994, the hole was over seven miles deep, making it by far the deepest hole ever drilled by humankind. But even at that depth, the Kola project only penetrated into a fraction of the Earth’s continental crust, which ranges from twelve to fifty miles thick.

There is a diamond mine located on the outskirts of Mirny, a small town in eastern Siberia. That begun in 1955, and is now 1,722 feet (.52 km) deep and 0.78 miles (1.2 km) in diameter. This hole is impressive. To get to the base of the pit, massive 20-foot tall rock-hauling trucks travel along a road that spirals down from the lip of the hole to its basin. The round-trip travel time is two hours. The Mirny diamond mine has a volume of over 7 BILLION bbls (1.1 billion m3) and its only the second-largest man-made hole in the world.

6 Responses to What is the longest, deepest and largest hole ever drilled on earth?