We’ve found this vidoe on Youtube and this is one of the most interesting stories of well control. This is about how to kill the blow out well using a nuclear bomb. We are not sure when it was happened but from what you can see, this was quite long time ago when directional technology was not good enough to successfully drill a relief well. Please see the video below and we already added the footage transcript for further learning.

Many people ask us every time about well control but many of them understand that well control is when the rigs are burn. This is not the right concept.

Well Control is a situation when hydrostatic pressure in a wellbore is less than formation pressure therefore reservoir fluid will come into a well. If a well control situation is not taking care of properly, it will result in blow like you can see in the VDO below.

The short VDO, only 1 minute and 34 seconds, clearly show that what will be happening if the well cannot be control.

Adriatic IV Blowout incident is one of the worst oilfield incidents happened in our industry. We need to learn and understand about it so we can prevent this incident to reoccur again in the future.

In the month of August 2004, Adriatic IV was placed near the Temsah gas production platform, off Port Said situated in Egypt (Mediterranean). The rig was busy drilling a natural gas well and there was a gas explosion which took place. It has been vindicated through reports that the blast was followed by a fire which later escalated to the Petrobel-run platform where it was raging persistently for about 7 days after which it was taken care of. About 150 personnel on the jack-up were saved and all the production and functions were stopped.

It was vindicated through studies and reports by Global Santa Fe that the Adriatic IV was completely submerged and could not be saved or restored. Joint owners of the platform were Italy’s ENI, BP & Egypt’s General Petroleum Corporation and the platform was completely in a dilapidated condition and hence the Egyptian Petroleum minister commanded to destroy it completely. In about 12 months following the catastrophe, the Temsah field and its production activities were restored in a full-fledged manner. 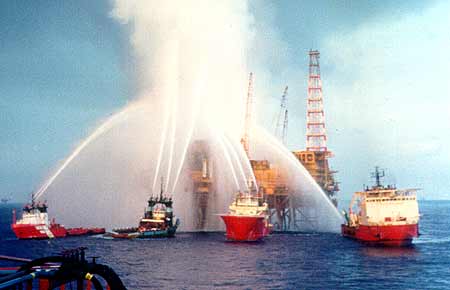 Ekofisk Bravo blowout incident happened when performing workover operation. If you study in the oilfield industry about well control incidents, there are several cases when the well was unable to control during workover operation. This is what personnel working in this industry needs to learn and fully aware of the hazard which could be occurred and this can affect lives, environment, etc. This is one of the reason why we always emphasize the important of well control in every operation.

The Ekofisk Bravo Platform is located towards Ekofisk field’s north and is one of the two prime wellhead production facilities of Ekofisk. However, on April 22nd, 1977, it went through a major blowout which is regarded as the biggest oil spills till date at the North Sea.

The Ekofisk B blowout took place when workover was being carried out at B-14 production well where they were busy pulling about 10,000 feet of production tubing. Before the task, the production Christmas tree valve stack was removed. Besides, the BOP was not installed. However, the well kicked and wrongly installed while the downhole safety valve failed, which caused immediate blow out of the well with wild release of gas & oil. However, fortunately the crew onboard was evacuated safely through lifeboats and was later transferred to the supply vessel. Miraculously, no one was injured.

This event led to wastage of approximately 28,000 barrel/day, later resulting into overall discharge of 202,380 bbls. Around 30-40% oil was assumed to be evaporated and the overall spill estimate by the Norwegian Petroleum Directorate was to be considered around 80,000 bbls & 126,000 bbls.